Twice as many salmon and steelhead are predicted to return to the Columbia River Basin in 2019 as returned last year, Washington, Oregon, and Idaho state fish biologists reported at the Council’s March meeting. The prediction for this year is 1.3 million fish entering the Columbia River to begin the upriver journey to spawn; last year the total return was 665,000.

While that is an improvement, it is fewer than the current 10-year average of 2.21 million fish, said Dan Rawding, Columbia River policy and science coordinator for the Washington Department of Fish and Wildlife. He noted the average for the decade of the 1980s was 1.5 million, for the 1990s 988,000, and for the 2000s 2 million. The upriver component (above Bonneville Dam) of the total salmon and steelhead run is forecasted at 968,000 fish this year compared to 619,400 in 2018.

Forecasting fish returns is a bit like forecasting the weather months in advance. Fish biologists collect information on smolt migrations in previous years, ocean conditions, and returns in recent years then make educated guesses. Harvest seasons are set based on the predictions then adjusted as the fish return. In 2018 fishery managers met 28 times to adjust fisheries, with the goal of balancing conservation of the salmon and steelhead runs with providing fishing opportunities, Rawding said.

Coho are the reason for the large increase in estimated total returns in 2019. A change in ocean conditions appears to favor coho this year. As well, ocean and in-river harvest of coho has been declining since 2005. So the optimistic forecast for the 2019 coho return this fall is for 726,000 fish entering the mouth of the river. The 2018 forecast was for 286,200 coho, and the actual return was 147,300. 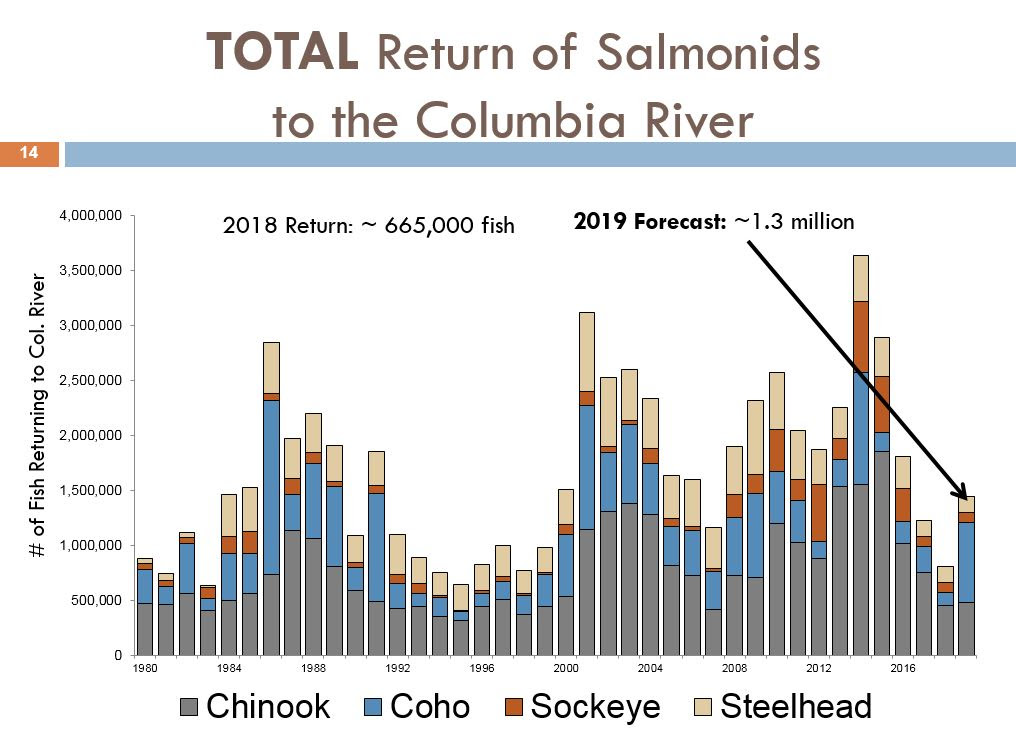 Here is a look at some of the forecasts for 2019 (all of the forecasts can be viewed in the agencies’ presentations for salmon and steelhead returns to the Columbia and the Snake on the Council’s website):

Columbia River chum salmon: the 2019 forecast is 10,000 fish. While the fish historically ranged as far inland as The Dalles, today nearly all chum spawn downstream of Bonneville Dam. Run sizes vary year to year and have ranged from 5,000 to about 40,000.

Sockeye: The 2019 forecast is 94,400 fish; the 2018 return was 99,000. Most of the Columbia River run spawns in the Okanagon and Wenatchee river basins, but there is a very small component of Snake River sockeye, an endangered species. The forecast for those fish in 2019 is 43 natural-origin, compared to 36 last year, and 86 hatchery fish, compared to 240 last year. Fish raised at the new sockeye hatchery in Springfield, Idaho, should help boost adult returns in future years.

Snake River fall Chinook (combined natural-origin and hatchery): 10,016 hatchery and 5,435 natural-origin fish. Those numbers are close to the 2018 returns.

Meanwhile, rapidly changing conditions in the ocean environment have made forecasting salmon and steelhead returns even more difficult. Brian Burke, an ocean scientist with NOAA Fisheries in Seattle, said some aspects of the ocean ecosystem appear to be back to normal, but others are still changing. In response to the variability – from warmer than normal to cooler than normal in the course of a couple years recently, with the current trend toward cooling — he said, “my new answer is the ocean is still changing; we are seeing more variability, and ‘typical’ and ‘normal’ conditions are difficult to define.”